When discussing the progression of the COVID-19 pandemic, the term “waves” is often heard. There are many different circumstances which can generate a wave in the time series of cases. We outline some possibilities in Table 1 (drawn from our recent paper[1]). These waves are not always driven simply by an increase in transmission. We present in this table three types of wave which were identified by comparing the time series of cases to that of deaths and of positivity ratios (the ratio of new cases per day to new tests per day).

The two main drivers of waves in cases are transmission and testing. A wave may be driven by an increase in transmission, an increase in testing, or some combination of these two factors. We can seek to infer the relative importance of the two factors  after the fact, from the presence or absence of an accompanying mortality incidence peak. This relies on an assumption that the time series of deaths provides a more reliable and consistent indicator of trends in viral activity than the time series of cases. However, it is clear that the case fatality ratio changes over time, with vaccination being one key influence.

One can further identify a third type of wave at the national level (spatially asynchronous waves) where waves occur in different regions at different times, resulting in the appearance of multiple waves on the national scale. This figure illustrates a clear example in the United States, where we see three (perhaps four) waves of confirmed cases. There is an evident geographical variation between the waves, with the outbreak being concentrated in different regions at different times (Figure 1).

Figure 1. A visualization of how the geographical concentration of COVID-19 has varied over time across the United States. Individual states show wave structures but the result of aggregating data at the national level is that local waves overlap and are not so distinct from each other. 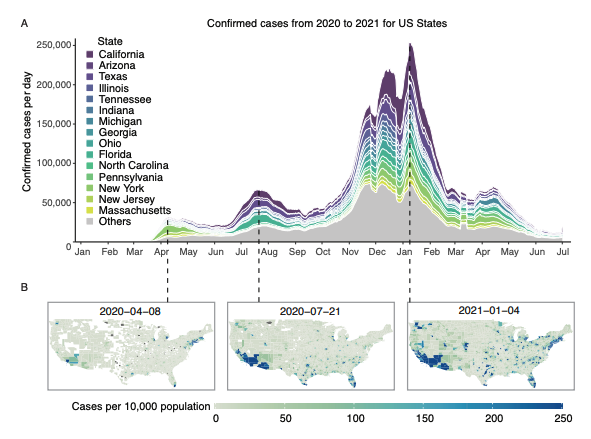 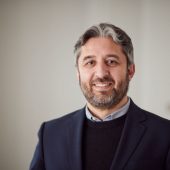 Adam is the Project Lead. 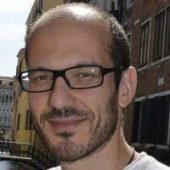 You can find out more about which cookies we are using or switch them off in settings.

This website uses cookies so that we can provide you with the best user experience possible. Cookie information is stored in your browser and performs functions such as recognising you when you return to our website and helping our team to understand which sections of the website you find most interesting and useful.

This cookie remains on your computer for 365 days, but you can adjust your preferences at any time by clicking on the "Cookie settings" link in the website footer.

Please note that if you visit the Oxford University website, any cookies you accept there will appear on our site here too, this being a subdomain. To control them, you must change your cookie preferences on the main University website.

If you disable this cookie, we will not be able to save your preferences. This means that every time you visit this website you will need to enable or disable cookies again.

Please enable Strictly Necessary Cookies first so that we can save your preferences!

This website uses Google Tags and Google Analytics to collect anonymised information such as the number of visitors to the site, and the most popular pages. Keeping these cookies enabled helps the OII improve our website.

Please enable Strictly Necessary Cookies first so that we can save your preferences!